Since the teeth of the spur gear are parallel to the axis of the gear, the same is true in each plane perpendicular to the axis. However, the gear always has a certain width, so the points and lines studied on the end face actually represent the lines and surfaces on the gear. As shown in Figure 1a, the tooth profile surface of a spur gear is an involute surface formed by a straight line KK parallel to the gear axis on the generating surface when the generating surface rolls around the base cylinder. 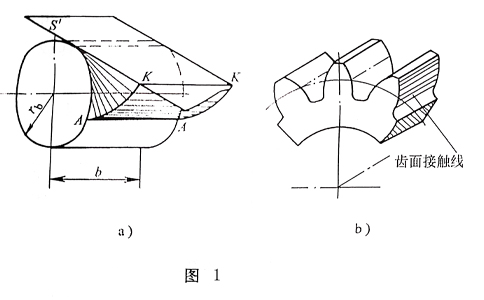 From the formation process of the tooth profile surface, it can be known that when a pair of spur gears are engaged in the transmission, the instantaneous contact line of the two tooth profile surfaces is a straight line parallel to the gear axis. As shown in Figure 1b, in the process of meshing transmission, a pair of gear teeth enter and exit meshing simultaneously along the entire tooth width, so the load on the gear teeth is suddenly added and suddenly released, making the spur gear The transmission stability of the mechanism is poor, and it is easy to produce large impact, vibration and noise. In order to overcome the shortcomings of spur gear transmission, helical gears appeared. 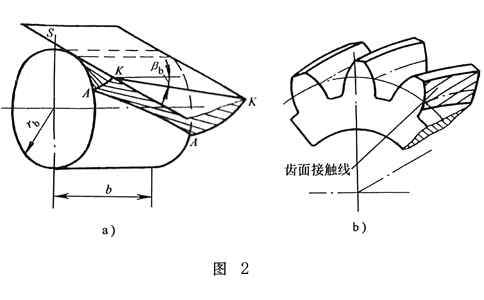 The formation principle of the tooth profile surface of the helical spur gear is similar to that of the spur gear, the difference is that the straight line KK developed into the involute surface is not parallel to the axis of the gear, but is skewed by an angle βb, as shown in Figure 2a . When pure rolling occurs around the base cylinder, the trajectory of the straight line KK is the tooth profile surface of the helical gear. Since the trajectory of each point on the oblique line KK is an involute in a plane perpendicular to the gear axis, and each point on the oblique line KK contacts the base cylinder in turn, the set AA of the starting points of the involute is a helix , so the tooth profile surface of the helical gear is actually an involute helical surface. It can be seen from this that the intersection of the tooth profile curved surface and any cylindrical surface on the gear is a helix, and the acute angle between the tangent of the helix and the gear axis is called the helix angle on the cylinder. Obviously, βb is the helix angle on the base cylinder. The larger βb, the more skewed the tooth direction of the gear teeth. When βb=0, it becomes a spur gear, so a spur gear is a special case of a helical gear. 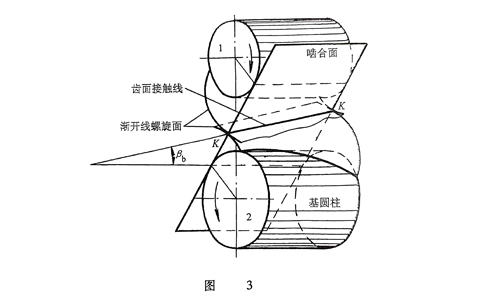 Figure 3 shows the formation process of a pair of mutually meshing helical cylindrical gear conjugate surfaces. The meshing surface is the inner common tangent surface of the base circles of the two wheels. is the instantaneous contact line of the two tooth profiles at the position shown in the figure. Therefore, during the meshing process of a pair of helical spur gears, the contact line on the tooth surfaces of the two gears is inclined, and changes from short to long, and then from long to short, as shown in Figure 2b. The entire meshing process is a process of gradually meshing and then gradually withdrawing, and the load on the gear teeth is gradually added and gradually removed, so the helical cylindrical gear mechanism has stable transmission, less impact, vibration and noise, and is widely used in high-speed in heavy machinery.