1. Good meshing performance. In the helical gear transmission, the contact line of the gear teeth is an oblique straight line whose angle is βb, and the gear teeth gradually transition from one end to the other end from the start of meshing to the disengagement, so the overall operation is smooth and stable, and the noise is low. This meshing method also reduces the influence of errors in the gear manufacturing process on the accuracy of use.

2. Great coincidence degree and high load-bearing capacity. The coincidence degree of the helical cylindrical gear is generally more than 2, and the maximum can reach 10, so the number of tooth pairs meshing at the same time is large. This can not only reduce the load on a single gear, improve the overall bearing capacity of the gear, but also increase the smoothness of the transmission.

3. Compact transmission structure. Since standard helical spur gears have fewer teeth than spur gears without undercutting, the size of the mechanism is more compact.

4. The manufacturing cost of helical gears and processing equipment such as machine tools are the same as those of spur gears. 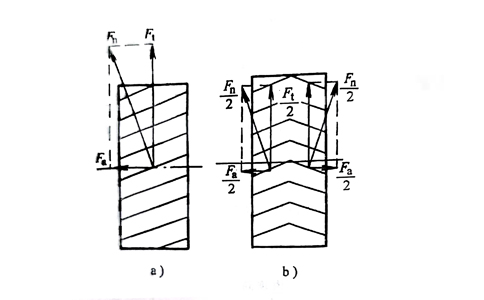 5. There is axial force during transmission. as the picture shows. Due to the helical angle of the helical teeth, the axial thrust generated in the transmission is Fa=Fttgβ. When the circular force Ft is constant, the axial thrust Fa will increase with the increase of the helix angle, which is not good for the transmission. In order to give full play to the advantages of helical gear transmission without affecting the excessive axial thrust, β=8°~20° is generally adopted in the design. If you want to completely eliminate the axial force, you can use the herringbone gear shown in b. The left and right parts of this gear are completely symmetrical, that is, the helix angles of the gear teeth are equal in size and opposite in direction, so the generated axial forces can cancel each other out. When designing, the helix angle of the herringbone gear can be larger, generally β=25°~35°. But the disadvantage of herringbone gear is that it is more difficult to manufacture